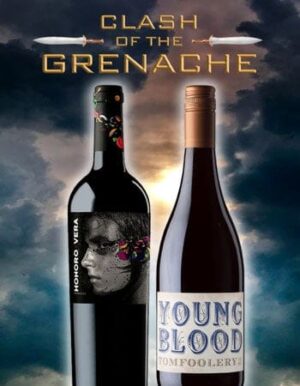 Clash of the Grenache

Well, finally Grenache’s patience is being rewarded in Australia as more and more discerning makers are featuring the variety’s many qualities as single varietal wines, and why not considering that Australia possesses the oldest Grenache vines in the world (Cirillo in the Barossa) and oldest regional average vine age (90+ years in McLaren Vale)? A great, accessible example of the pure fruit qualities, raspberries, spice and light herb characteristics which make this so appealing in our country is Tomfoolery “Youngblood” Grenache from old vines out of the Barossa. “Inspired by the new wave ‘Vino Joven’ wines of the old world, Young Blood Grenache is released as a cheeky youngster with just a brief barrel maturation to showcase structure and varietal character, while retaining freshness and finesse.”

Meanwhile in the ancestral home, Spain (thought to be the origin point), Grenache is the third largest grape variety by volume and plantings yet over time, had gone through similar stages of neglect only to be recently championed as the friendly, beguiling and food-friendly wine it is. The regions most noted for this plucky variety are in the North, particularly the rocky and poor-soiled higher parts of Catalonia and Aragon where it delights in the challenge of making a lot out of a little. In the same ‘Vino Joven” style, Honoro Vera Garnacha (the Spanish translation of Grenache), from the famed “desolate, arid” Catalan region, delivers a fruit purity which demonstrates a blackberry, rose petal and dried-herb character and restrained power on which the variety’s reputation is being built.