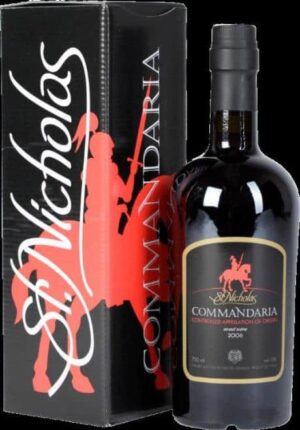 Commandaria has a rich history dating back to Homeric times when it was a popular drink at festivals celebrating the goddess of beauty Aphrodite who emerged from the sea at Paphos in Cyprus – a scene immortalized by Botticelli’s famous painting, “the Birth of Venus”.

A dried grape wine from Cyprus was first known to be described in 800 BC by the Greek poet Hesiod and was known as the Cypriot Manna. Previously it was called “Mana” the Greek word for “Mother”. The reason for this is very interesting. The wine was matured in giant earthenware jars. When the time came to pour it out, a certain amount was left in the bottom. When the new wine was added, the old wine helped it to mature. So the old became the mother of the new. It is very likely that the Commandaria you can buy today is the original Cypriot wine enjoyed by the Greek poet Homer and drunk by the Pharaohs of ancient Egypt. The grapes are spread out to dry in the sun, then pressed. The juice is collected and fermented in old, very large wooden barrels.

Until today “Commandaria continues to be produced as in days gone by, improved only by the selection of grapes and a better treatment and with its name and quality protected by an appellation d’origine. The preparation of Commandaria is a very old lesson which is handed down from generation to generation.
Commandaria goes great with dried figs, any type of dark chocolate, ice cream and smooth goat’s cheese. Commandaria is not only delightful as drink, but it’s also perfect as meal or drink ingredient. Below are two
single price
$34.99
Quantity discounts available:

More from the DeVine Dessert aisle