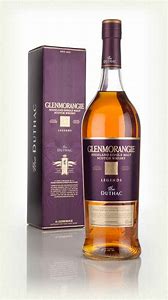 At the centre of the Royal Burgh of Tain, Ross-shire, in the far north of Scotland where the Glenmorangie Distillery has stood proudly since 1843, lies the resting place of St Duthac. During the Middle Ages, the legends of his workings drew travellers from far and wide on pilgrimages to the ancient burgh.

A whisky fit for a King, this expression honours the annual pilgrimage made by King James IV to the shrine of St Duthac in Tain, and is part of Glenmorangie Legends

Aroma: Seductive aromas of pear, toffee apple, Brazil nuts in toffee, with an underlying spicy note, some toasty oak. With a splash of water, some creamy vanilla fudge is encountered, along with the classic Sherry cask note of linseed oil.

Taste: Mouth-filling flavours of milk chocolate, toffee, Brazil nuts, leather and some aniseed. The spiciness is definite, but gentle, with hints of ginger and clove.

Finish: The aftertaste once again reminds drinkers that this is a Glenmorangie, with vanilla, apricots in cream and some almond marzipan.

More from the DeVine Scotland aisle