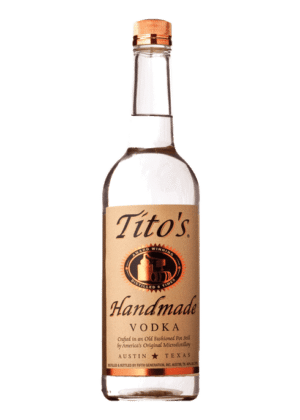 Tito’s Handmade Vodka is a vodka made from yellow corn, produced in Austin, Texas in the first legal distillery in Texas, established by Bert “Tito” Beveridge II. A native of San Antonio, Texas, Beveridge received the diminutive nickname “Bertito”, shortened to “Tito”.

It’s made in small batches in an old-fashioned pot still by Tito Beveridge and distilled six times. Tito’s is filtered through activated carbon which absorbs any remaining impurities without stripping the vodka’s character and provides an extremely smooth finish. Double Gold Winner in the 2001 San Francisco World Spirits Competition. Naturally gluten free.

More from the DeVine Vodka aisle