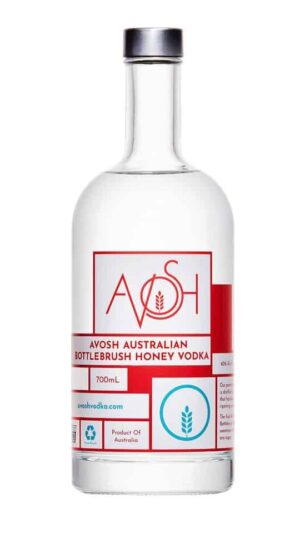 The depth of flavour in this vodka is captured during distillation process, without any of the sugar from the honey making it into the final product.

Slowly distilled in a copper pot still, the organic bottlebrush honey imparts an aromatic smooth and sweet character into the Bottlebrush Honey Vodka.

Made using only the most premium Australian wheat farmed locally, prior to harvest the wheat is ripened in the Australian summer sun. Premium water is used in production to produce the clean, crisp and smooth mouth feel that is uniquely AVOSH.

Avosh Premium Vodka is distilled a total of six times, the last of which occurs slowly in a copper pot still, before being filtered for a clean smooth taste.

AVOSH Australian Premium Vodka can be enjoyed chilled over ice or in many of your favourite cocktail recipes.

More from the DeVine Vodka aisle