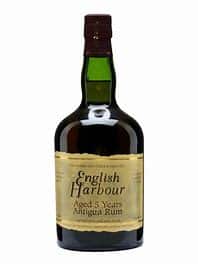 Molasses is fermented for 24 to 36 hours in open-top fermenters using a mix of commercial and wild yeast. A five-column continuous still is used for distillation, one of only two copper continuous stills in the Caribbean. The column stills produce a lighter style of spirit that is full of character and intense in flavor. Maturation takes place in warehouses without temperature control using ex-bourbon and Tennessee whiskey barrels.

English Harbour Five Year Rum has Superior excellence and flavour. Viewed by Rum Connoisseurs in the Caribbean and Worldwide as an impeccably smooth, light bodied Rum. This Rum is aged in oaken casks and is a minimum of five years old. With numerous awards under its belt English Harbour 5yr Rum speaks for itself as it has converted many cognac and scotch drinkers into 5yr Old adorers.

More from the DeVine Rum aisle